On the week of the worst terrorist attacks in recent history in Europe, news that has shaken the international community to its core, a group of men and women, diplomats, journalists and Rabbis, Imams, and Reverends, met at the United Nations for the November 9th Summit mobilizing Cultural and Religious Ethics for Agenda 2030.

It is notable that it was the Permanent Mission of Panama to the United Nations that hosted this event, given that this small and prominent Latin American country, decades earlier, had been one of the visionaries to promote the Jewish lawyer, Raphael Lemkin and his 1948 Convention on Genocide, which was ultimately, the cornerstone for the International Criminal Court now based in The Hague.

Co-sponsored by the Insitute of Noahide Code, the platform for this event on 9th November, was the Universal Noahide Code “UNC”, setting forth to the international diplomatic and religious community what philosopher Hugo Grotius cited as the basis for the 1945 United Nations Charter and thus, the cornerstone of all international law.  Grotius further pointed out that the “UNC” is the practical means, by which humanity may strive to live in unity and in peace and can thus fulfill its potential to see all the families of the earth blessed.  These laws of peace and unity encompass respect for G-d, for human life, respect for the family, for other people’s property, for the creation, respect for judicial systems plus respect for all creatures and the environment.

Among those participating, Her Excellency, the Ambassador Laura Flores of Panama, who was the keynote speaker and opened the event welcoming everyone.  Ambassador Flores highlighted the efforts to be made now, so that future generations inherit and can enjoy a culture of peace built on respect and understanding.  Peace which indeed in thought, and also in the Wall in front of the United Nations Headquarters, is prominently displayed not far from where Ambassador Flores spoke.  There on the famed 1948 Isaiah Wall, we read, “They shall beat their swords into plowshares, and their spears into pruning hooks; nation shall not lift up sword against nation, neither shall they learn war any more.”

Another notable speaker among many prominent participants as The Honorable H. Lincoln Douglas, Minister from Trinidad and Tobago, was Mr. Gianni Picco, former Under Secretary General of the United Nations.  On the 9th November, Mr. Picco who was instrumental and actively involved in releasing numerous Western hostages in the Middle East, notably Beirut, spoke about his mediation among terrorists and then some regional tyrants, to save lives, reunite families, spare the world of more bloodshed.  Moderating the events, was the Mayor of Lawrence, Long Island, Mr. Martin Oliner, where the Druze leader, Coronel (Ret.) Munib Bader spoke about how the Druze have no aspirations of becoming a country or converting anyone to their monotheistic religion or tradition, and are loyal to the people where they reside.  Because 2,000,000 Druzim live in Syria, in Lebanon, and in Israel, the Druze are uniquely positioned to bring peace among these people in the region, according to Coronel Bader.

Among other prominent speakers at the United Nations, Rabbi Elie Abadie, of Yale University Center for Faith and Culture, and Chief Rabbi of Safra Synagogue in Manhattan, and Imam Shamsi Ali, spiritual leader of Jamaica Muslim Center of New York.  Whereas Rabbi Abadie spoke about how religious leaders have to find a means to transmit religious values in a manner that is both positive and conducive to non violence, Imam Ali said that he has been actively pursuing the building of bridges between the different religions that stem from Abraham.

Rabbi Yakov David Cohen, founder of the Institute of the Noahide Code and accredited to the Economic and Social Council at the United Nations, opened the panel of religious and cultural values.  He first thanked among others, Dina Katz , without whose expert involvement, the event would have been very difficult to organize.  Furthermore, Dr. Leonard Grunstein spoke about finances and development as a means of empowering people.  Rabbi Cohen also mentioned, Mrs. Judy Schaffer, who moderated a panel on development.  But it was Rabbi Yakov Cohen, who reminded those present in this first UNC Summit at the UN, that the basis of the gathering were the 7 Laws of Noah, with the common thread of the memory of the destruction and despair, upon which the UN was established.  The Rav reminded those present that the event was being held on the 77th anniversary of Krystallnacht, a time of darkness and desperation, which memory placed on those participants, and their constituents and congregants, the unique responsibility which humankind carries to be messengers of goodness, kindness and global change. 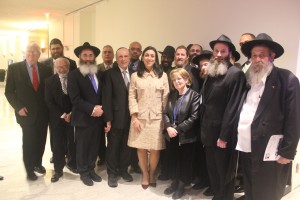 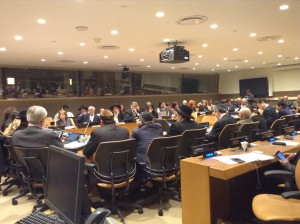 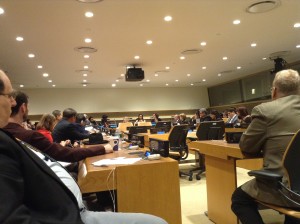 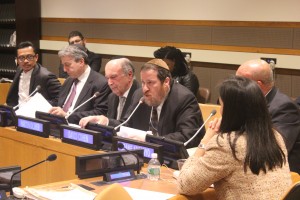