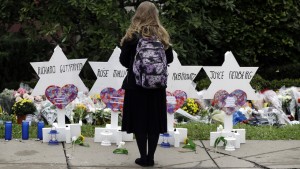 A person stands in front of Stars of David that are displayed in front of the Tree of Life Synagogue with the names of those killed in Saturday’s deadly shooting in Pittsburgh, Monday, Oct. 29, 2018. (AP Photo/Matt Rourke) 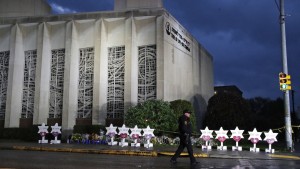 A Pittsburgh Police officer walks past the Tree of Life Synagogue and a memorial of flowers and stars in Pittsburgh on Sunday, Oct. 28, 2018, in remembrance of those killed and injured when a shooter opened fire during services Saturday at the synagogue. (AP Photo/Gene J. Puskar)

Universal Noahide Laws at the UN

One man had a dream once, that his children will one day live in a nation where they will not be judged by the color of their skin, but by the content of their character. This dream was born out of the ashes of a crumbling belief that one man was worth more than another. This misguided idea, that a free man was still subject to the will of his former masters, was and still is a microcosm of a problem that is facing the world today.

The prejudice, bigotry, violence and wickedness that infects every nation is the result of a lawlessness born out of our tendency to forget our past. The nations of our planet face daily battles between people whose only real fault is ignorance of the laws given to mankind since the time of Adam. These forgotten laws are known as the Universal Noahide Laws and are ostensibly a paragon of ethical behavior meant to guide mankind to perfection through good deeds and to propagate knowledge and understanding of the Divine.

It should be the dream of all people that our children should not only live in a nation where they will not be judged by the color of their skin, religion or social status, but that they should live in a nation that adopts these Universal Laws as the foundation of the existence of that nation.

In 1945, the United Nations was established to promote international co-operation as well as to create and maintain international order. The original 51 member states began with a vision that all nations, great and small, would benefit from a conglomerate of working together in their efforts to foster social and economic development, provide humanitarian aid, promote human rights and maintain peace between all nations. Today, over 190 countries have joined this international body in hopes that the infrastructure of peace lies within.

One of the principal organs of the UN is the Economic and Social Council, or ECOSOC. This 54 member council serves as a forum for discussing international economic and social concerns, as well as delivering recommendations regarding policy to be addressed to the entire UN body. ECOSOC deliberates with many non-governmental organizations , or NGO’s, that participate in the day to day activities of the UN. The Institute of Noahide Code-UN is an accredited NGO with consultative status promoting peace through the values set in place by the seven Universal Laws. These laws are the Key to opening up a dialog between people of all nations, regardless of creed, religion or social class. They represent the common bond of all people across the globe, the backbone of peace. These laws are the framework for building a bright future for our children.

The foundation for establishing these Universal Laws at the UN is already in place due to the tireless efforts of Rav Yakov D. Cohen, executive director of the Institute of Noahide Law. As our generation witnesses the moral decay of the society around us, like what the world recently witnessed in Pittsburgh, Pennsylvania, it becomes a moral issue whether or not to become proactive in stopping this burning hate that is festering in regions all over the world. We are beginning to forget the lessons that we learned from the Holocaust, which included the greatest lesson, that even discrimination against one group of people will result in the unraveling of the fabric of our entire society.

If we forget those lessons, if we forget our past, if we forget the Universal Laws, then our dreams of a utopia world for our children will fade away and be forgotten. These lessons, laws and future go hand in hand. In order to make peace between all nations, then all nations must realize that it is time to stop dreaming and embrace our reality. All of our lives depend on the choices we make from moment to moment. Each new moment provides us opportunities to change who we are. Now is the time to make the Universal Noahide Laws a priority.

When enough people recognize the importance of the Universal Laws, people and nations can truly begin the healing process all over the world with a common goal of providing our children with their own moments and chances to build a future for their children, our grandchildren. If we lose sight of our responsibility to pass on the knowledge of these laws to the next generation, we forfeit our future.