Kosher and Halal Food in Schools

Kosher and Halal Food in Schools 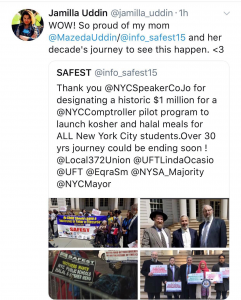 No child should leave Lunchroom or enter a classroom hungry:

Political, civic, and religious leaders from across the spectrum have united in a groundbreaking effort to secure school lunches that meet the religious requirements of the diverse population in New York City’s public schools.

September 6th, 2016 at 12 noon at the steps of Manhatten’s City Hall will host a dynamic gathering of top leaders to push proposed Senate bill S1032 to ensure the availability of Halal and Kosher lunches for every school that hosts twenty-five percent or more students from a faith community that has dietary restrictions.

Senator Tony Avella (D-QUEENS) is credited with pioneering this effort. He shares, “The population of residents in cities like New York City who practice a religious faith with specific dietary restrictions is rising….Offering students these types of food options during lunch not only accommodates their dietary restriction but also enhances students’ awareness and respect for diversity in cultures, religions, and ethnicities.” Another active contributor is Assemblyman William Colton (Brooklyn), “as a former teacher, I understand the importance of ensuring the proper and healthy nourishment of children to educational progress. I have cosponsored two legislative bills (A8474, Ortiz & A 4328 Sepulveda) to provide for such needs.” Hailing these efforts as basic to American democracy, Assembly member Jaime R. Williams (District 59 Brooklyn)states, “To be without such food due to governmental agencies not considering important religious ideals is contrary to all our great beliefs of our City, State and Nation. Diversity of our religions has always been a cornerstone of our democratic system and that is why I support and urge others to support the mandate that no child should leave a
lunchroom or classroom hungry.”

Awareness for this pressing need was galvanized by Mazeda Uddin, Muslim woman activist and humanitarian,founder of the S.A.F.E.S.T. advocacy organization and leader in meeting the needs of immigrant populations from
all over the world.

Mazeda Uddin reflects, “Often these children go to bed hungry because they did not eat a good diet during the day.The parents of many of these children are on minimum wage trying to make ends meet and struggling to give their
children a proper diet on a daily basis.”

This proposed bill is hailed as a testimony to the tolerance and diversity of New York City; at the forefront of world leadership in finance and culture, now the city is trailblaizing efforts at true coexistence. State Senator Jose Peralta (D-Queens) remarked, “I want to thank the South Asian Fund for Education, Scholarship and Training in its efforts to bring Halal and Kosher menus school cafeterias.” Adding his support, State Senator Jesse Hamilton said, “Our public schools must be sensitive to the needs of every student, so providing kosher and halal meal options to students is imperative. I urge the Department of Education to act promptly to ensure that no student goes hungry.” because of their religious background.”