by Shalom Abramowitz, Chabad.Info
with additional information by Tiffany Gabbay, The Blaze

Last night, the Razag ballroom in Crown Heights hosted one of the most powerful and inspiring events since its founding. A gala dinner honoring the great work of the “International Campaign for Saving The Land of Israel” directed by Rabbi Sholom Wolpo, and their “Gush Katif Museum.”

Chabad Chassidim from Crown Heights were joined by Jews from the Metro NYC area, and even some Non-Jews who care about the safety and security of the Jews in their ancestral land, Israel. They all came to show support to the great work done by the institution, informing and reminding everyone about the sheer stupidity behind giving land to hideous terrorists.

The event was emceed by Rabbi Dudi Farkash, who began by inviting renowned Chabad speaker Rabbi Yossi Jacobson to address the participants. Rabbi Jacobson spoke about the absurdity in giving land to terrorists and the destruction of vital Jewish settlements. He also pointed out that it is the only country in the world which has laws barring Jews from residing in areas inside its borders!

One of the evening’s keynote speakers was none other than Glenn Beck.

Dubbed by those who introduced him a righteous gentile and one of Israel’s “greatest friends,“ Beck spoke to the crowd about both the ”honor“ and ”responsibility” we incur for having been born into these tumultuous times, and noted that it is indeed “1938 all over again.”

The resounding message of the evening was clear: All of Eretz Israel (the land of Israel) belongs to the Jewish people.

He said that while many think him fearless, he is in truth most afraid of the consequences we may suffer for going against God and abandoning a life of uprightness. For Beck, there is no other choice but a path of righteousness. That righteousness is defending the innocent: Israel.

One of the key messages Beck hoped people would take away was a promise to “question with boldness” that which does not sit right with one’s conscience and common sense. He promised that if people were unafraid of such questioning, they would see the truth: that the Obama administration is “no friend of Israel’s.”

Beck, who lauds the righteous gentiles who rescued thousands during the Holocaust, ceded that too many stood idly by, silent. He added that when the Holocaust simply becomes “academic,” we no longer honor those who paid the ultimate price and that history can then easily be repeated. “It’s life, not academic,” Beck said pointedly.

Citing the recent string of vitriolic, anti-Semitic attacks across Midwood, Brooklyn and Rutherford, New Jersey, Beck said that he no longer recognizes his own country. “Evil is growing,” he warned.

Brimming with insightful passages and stories from his many travels — to Israel, the Vatican and even Auschwitz — Beck’s message of standing tall and doing the heavy lifting for what is right resonated with the audience in audible measure.

One instance that drew hearty rounds of approval was when Beck spoke about the new “civil rights movement,” saying that today’s leaders have twisted a noble pursuit into a hatred reserved for all the wrong subjects. Cloaked under the guise of a belief in civil rights, many today will say, “I am not against Jews, just against Zionism.”

“Well,” Beck started, “being anti-Israel, and being anti-Zionist, is anti-Semitism.” He also noted the irony of the fact that it was actually Dr. Martin Luther King who coined that saying and mindset.

For Beck, today’s skewed version of the civil rights movement is a “sham” and a “joke” and is becoming a threat to all humanity. After all, when one compares Israel to an “apartheid state” when there is in fact no shred of truth to the claim, one dishonors those who suffered under apartheid in South Africa and discredits Nelson Mandela’s efforts to bring unity to his country. When one claims Israel is committing “genocide” against the Palestinian people, when in fact they are delivering to them food and aid (even at Israelis’ own peril), one discredits the atrocities occurring in Darfur. The Left says its civil rights leaders care about oppression and human rights, yet mask the instances of rape in their own communities, like Occupy Wall Street. These same “civil rights leaders” also turn a blind eye to the oppression and abuse suffered by women, gays and minorities in the very regions of the world they inexplicably defend.

Beck drew the stark comparison that today’s civil rights leaders are, in fact, no different than the terrorists, dictators and thugs they claim to revile.

In speaking about the faithful, Beck also touched on an unsung hero of the Holocaust – Dietrich Bonhoeffer – a German, Lutheran pastor who wrote a book entitled, Führerprinzip, or Fuhrer Principle. Bonhoeffer was a staunch opponent of the Nazis, and was even involved in the assassination plot against Adolf Hitler. The pastor’s plans were never realized, however, as he was arrested and killed just days before the Nazis surrendered and Hitler, in a cowardly display, committed suicide.

The point Beck made by relaying this poignant story was that in his attempt to “fight the madness,” he often has looked to Bonhoeffer and his resolve to stand tall in the face of evil.

He also conveyed the story of another righteous gentile, a woman simply by the name of Paulina, who, through her belief in God, saved scores of Jews in Poland during the Holocaust by feeding them soup her mother had prepared for them.

When asked by Beck how we, moving forward, can grow the seeds of righteousness in our own lives, Paulina’s answers were simple: “You must believe in something greater than yourself.” That, and sometimes people decide not to barrel ahead “off that cliff.”

“We must hold onto each other,” Beck said, and not lose hold of our humanity.

As Beck touched on both the uplifting and bittersweet snapshots of Israel’s history, he took pause to reflect on the Jewish State’s many enemies. “When Egypt says they are building the ovens. Believe them,” Beck warned. “They say what they mean. They mean what they say.”

Culminating in an emotional moment, Beck believes that Israel’s enemies are enemies of God, and that he has chosen his path of righteousness for his children. “It’s an honor to say my father stood,” he said.

At the end of the day, “If America stops being good, we will meet the same fate as Dietrich Bonhoeffer.”

After a long round of applause, the emcee returns to the podium to introduce Nebraska Congressman Lee Raymond Terry, who spoke about his recent trip to Israel and his incessant activities to promote a safe Israel policy in Washington.

Mr. John Robert Bolton, who served as the US Ambassador to the United Nations was next, discussing the Iranian nuclear threat, a topic close to his heart. He discusses the various steps that Iran took towards achieving nuclear weapons, and shares his utter dismay with the Obama administration who chose to restrain Israel rather than supporting an affirmative military strike against Iran.

The main course is served, and world-renowned violinist Daniel Ahaviel entertains the crowd with uplifting melodies.

A dinner is for fundraising, and this dinner is no different. Rabbi Sholom Wolpo ascends to the podium and awards the three major sponsors of the organization: R’ Sholom Ber Drizin of Crown Heights, R’ Shlomo Markovich of Mexico and R’ Efraim Julius of Israel.

This is followed by a video of Jewish comedian Mr. Jackie Mason, who with humor and wit convinces the crowd to open up their wallets and write big checks to the organization.

Media commentator Glenn Beck, former Ambassador John Bolton and philanthropists Sholom Ber Drizin and Shlomo Marcovich headed a gala dinner in Crown Heights to remember Gush Katif. By COLlive reporter Photos by Levik Hertzel (a Gush Katif alum) Over 500 people from throughout the New York area gathered Wednesday in Crown Heights in support of the Gush Katif Museum in Israel. The crowd sat spellbound in the dimly lit, elegantly decorated Razag Ballroom, as they listened to influential media personality Glenn Beck as he passionately spoke about the Holy land and its precarious situation.

Choking back tears a few times during his speech, the conservative commentator said that all “decent Americans have a responsibility to stand up for what’s right, to support Israel and its citizens.” The former Fox News host lamented the fact the media is hiding the truth – “aiding and abetting” the terrorists and those who would harm Israel – and said he is one of the few who dare to speak the truth nowdays. “People say I’m not afraid – but that’s an out and out lie,” he said. “I am afraid. But I’m more afraid to go against what G-d tells me to do. Afraid of what the world will be like.” “The world is insane,” he said. “The world is in trouble.” To loud applause Beck criticized people who claim to be just ‘anti-Israel.’ “To say that is to be anti-Jew. That’s anti-Semitism.” IRAN’S DANGER The dinner was organized by “SOS Israel – Our Land of Israel,” an organization headed by both Rabbi Sholom Dov Wolpo from Kiryat Gat and Rabbi Yekutiel Rapp from New York. Other speakers included Rabbi YY Jacobson of Bais Shmuel Chabad of Crown Heights, and the evening’s MC was businessman Dudi Farkash.

Nebraska’s Jewish Congressman Lee Terry said that he has been to Crown Heights many times, and said he was proud to be attending this dinner as a friend of Chabad and of Israel. Terry introduced former US Ambassador John Bolton, who spoke about the grave danger posed by Iran and criticized the Obama administration for not properly addressing the great threat posed by their nuclear weapons. “From its inception, Israel has had to defend itself repeatedly,” he said. “Great powers have tried to destroy it, terrorists have attacked it.” Still, he said, the US has imposed ineffective sanctions on Iran which have done nothing to stop them. LIFE IN PIECES Honored at the event were philanthropists Sholom Ber Drizin of Brooklyn and Shlomo Marcovich of Mexico for their support in remembering the Jewish settlements in the southern Gaza strip unilaterally evacuated in 2005. Binyamin Gottlieb, former head of two schools in Gush Katif, attended the dinner as well. After the expulsion by Prime Minister Ariel Sharon, Gottlieb had to begin again and, five years later, he is still trying to pick up the pieces and get his life back together. “The gezeira of our expulsion from Gush Katif was from G-d,” he told COLlive. “Therefore we are strengthening our connection to him, through increasing our learning, to try and reverse it.” Comedian Modi had the crowd laughing, but then spoke in earnest about the plight of the children of Gush Katif, and asked the crowd to come forward and pledge to support the organization’s programs.

Dozens of dinner guests made pledges on the spot, ranging from 18,000 – $250, and were applauded by the crowd. A video-conference message was shown from comedian Jackie Mason, also known for speaking out on political affairs and Middle East conflict. Book publisher and philanthropist Rabbi Meir Gutnick said the dinner, organized by Fleishman productions with the Rivkin family of Kolshar AV, was one of the most inspiring dinners he has ever attended. The Crown Heights resident has been active in Israeli causes for years, but said this dinner really stood out. “I hope the message of tonight, that we must preserve the integrity and sanctity of the land of Israel, will resonate around the world,” he said. “Especially now, with Bibi Netanyahu coming to New York in the coming days, we must be strong. When it comes to Israel, there can be no compromises,” he noted. 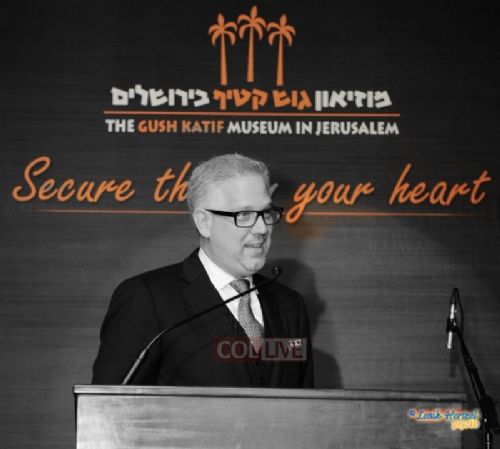