Greetings to our dear readers,

On Sunday Noverber 1, 2009 – Cheshvan 14, 5770 ; The Chabad of Fairfax, Virginia hosted a symposium on Noahide Laws, with Rabbi S. Deitsch www.CHABADofVA.com

The Choice is yours an international seminar that is centered on building universal solidarity and peace. The Seminar took place at the Chabad of Northern Virginia; the seminar brought together people from faiths with the goal of spreading the universality of the seven laws of Noah in the Washington DC area.

This seminar focused on increasing international commitment to peace and in our time, for it is very important that each person, independent of his religious creed, race or political choices, makes sure that he/she is making a contribution, through his/her own behavior to balance the world said Rabbi Y Cohen of www. Noahide.org

Non-Jews from different backgrounds such as Peruvian, Indonesian, African Americans among others came to learn about the Laws of Noah. There were also Jewish people who attended to learn more about the Noahide.

I asked one the Jewish ladies why she attended the event. I once tried to explain to a co-worker of mine about believing only in G-d and no other else. But my co-worker got upset. So I came to the event to learn how to approach or introduce the Noahide Laws and I learned a lot. I am happy to hear that we have big Noahide organizations who are working very hard to spread the word she said. As for me, I came for the same reason. Few months ago I heard that my mother was about to get invoved in a certain religion, coupled with heartfelt prayer to G-d; I immediately sent information about the Truth of G-d and there’s no other beside Him. I thank G-d that my mother listened. But what took place gave me a realization that just how much important for me that my family believes only in G-d, the Creator of Heaven and Earth; so desires that all mankind knows Him. It inspired me to help in spreading the Noahide laws.

The Program was led by Rabbi Yakov Cohen of Noahide.org, who spoke about Maimonides & played a film interview about people who adopted ovservance of the Noahide laws, accompanied by wisdom from prominent Rabbis.

The film played also described how wonderful the world will be in the era of Moshiach. It will be the world of which we dreamworld peace between man and his fellow, and in all of creation.

Our other guests were Rabbi Yehoishophot Oliver, and Dr. Michael Schulman, who displayed Noahide books,and assorted cards distributed by his organization, Ask Noah International. It was exciting to learn of the existence of a prayer booklet for Noahides .
On display were also seven Noahide Laws magnets which are also good gifts for non-Jewish friends and bumper-stickers.

We thank the rabbis who made the effort to come, and all those who strive to introduce to the world that HaShem our G-d, Blessed is He; is the True and Only G-d. Indeed, this is the same mitzvah that our Father, Avraham did in his time.

May Moshiach come speedily, and rebuild the Beit Hamikdash in Eretz Yisrael. Then Jews and non-Jews will come together in peace, and give thanks and praise to HaShem, our G-d. 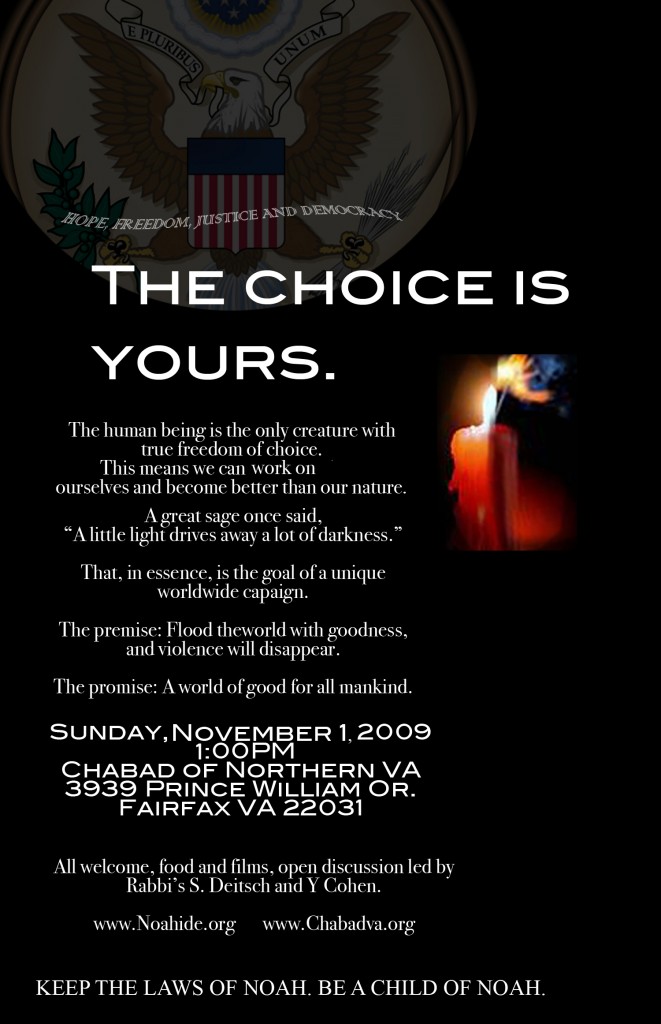